The Role of Museums in a Time of Climate Change

On the weekend before the beginning of COP 26, the Tate Modern chimney was lit up by ascending quotes from climate activists and leaders. From Swedish activist Greta Thunberg to US author Robin Wall Kimmerer. Legendary American artist Jenny Holzer’s light projection, which travels to Edinburgh and Glasgow after its Tate Modern launch, projected in large, singular, white block lettering the question: “If not us, then who? If not now, then when?”

These words, highly visible from vantage points across the river, the heart of central London, projected a powerful challenge to the British Government and corporate establishment, that inaction or ineffective action is no longer a viable option. In Glasgow and Edinburgh, they address the world.

Discussions around responses to climate emergency have been dominated by natural sciences and have often focused on technological solutions. However, the climate crisis is as much a crisis of the cultural and social environment as it is a crisis of the physical environment.

Museums and museum professionals keen to assert their role and relevance have sought to contribute in ways that scientists are unable, or less easily able to do so. As Director of Tate Modern, Frances Morris has stated, “the power of art to change minds is extraordinary because it reaches beyond your reason. It can make you feel extremely emotional through a personal relationship to images and sensations.”

This viewpoint is supported by a growing body of academic literature that suggests that the arts’ focus on engagement, attitude, and emotion, captivates audiences more effectively than a traditional scientific educational focus on understanding, comprehension, and application.

As a culture we are increasingly saturated with fatalistic news reports, climate change documentaries and social media threads that bombard us with facts and figures on the enormity of the challenge that we face. Museums can constitute an effective alternative way of raising awareness of climate themes achieving positive behavioural change, and importantly instilling hope.

While the museum sector’s efforts to decarbonise have nothing like the same impact as high-polluting industries such as energy, transport or construction, the sector can and should be aiming to play to its strengths.

Museums occupy a unique position of public trust, at a time when trust of governments and profit-driven businesses seems only to be falling. With governments facing increasing criticism over a lack of will and proportionate action, alongside growing accusations towards the corporate sector of greenwashing, museums have an opportunity to use this position of trust to build common cause with a growing societal appetite to act.

In 2018 to 2019 over 50% of people aged over 16 visited a museum or gallery at least once. As museums begin to return to the sorts of visitor numbers they experienced pre-Covid, climate change programming must become an urgent and central priority if the sector is to have the sizeable impact it can.

Over the last five years, museums of all sizes have begun to publicly acknowledge their responsibility to join the debate. In recent years major national museums such as Tate and the Natural History Museum have declared climate emergency. These institutions, alongside many others, have pledged to make long-term shifts in their business practices to effect positive ecological change. These pledges can often be separated into two distinct groups: internal institutional action aimed at reducing emissions, and a focus on introducing, expanding, and improving climate programming.

There are several not-for-profit charities that aim to move the art world toward greater sustainability. Two prominent examples are Julie’s Bicycle (focuses on the entire culture sector) and the Gallery Climate Coalition. Both suggest that the first step an organisation should take is to calculate their own emissions, allowing effective targeted action.

If museums are to be taken seriously as voices in the climate change debate, they must first be seen by the public to be making – not just incremental changes – but significant alterations to their traditional methods of practice. The example of those museums that have led the way - declaring climate emergency, publishing climate manifestos, or taking public steps toward decarbonising their internal infrastructures - increases pressure on other museums to follow suit. Truly effective action can only be achieved if it is visible across the sector as a whole.

Decreasing internal emissions is important, but museums can also have a distinctive, even unique role in raising awareness and inspiring action for change. Strong emphasis on climate issues in their programming seems the most obvious way for museums to reach their audiences and effect real change.

The nature of their collections and remits should surely define the parameters of their direct engagement. For instance, large national museums such as the Tate Modern or the Natural History Museum which have large collections can choose to use their existing collections to highlight ecological themes in new ways. 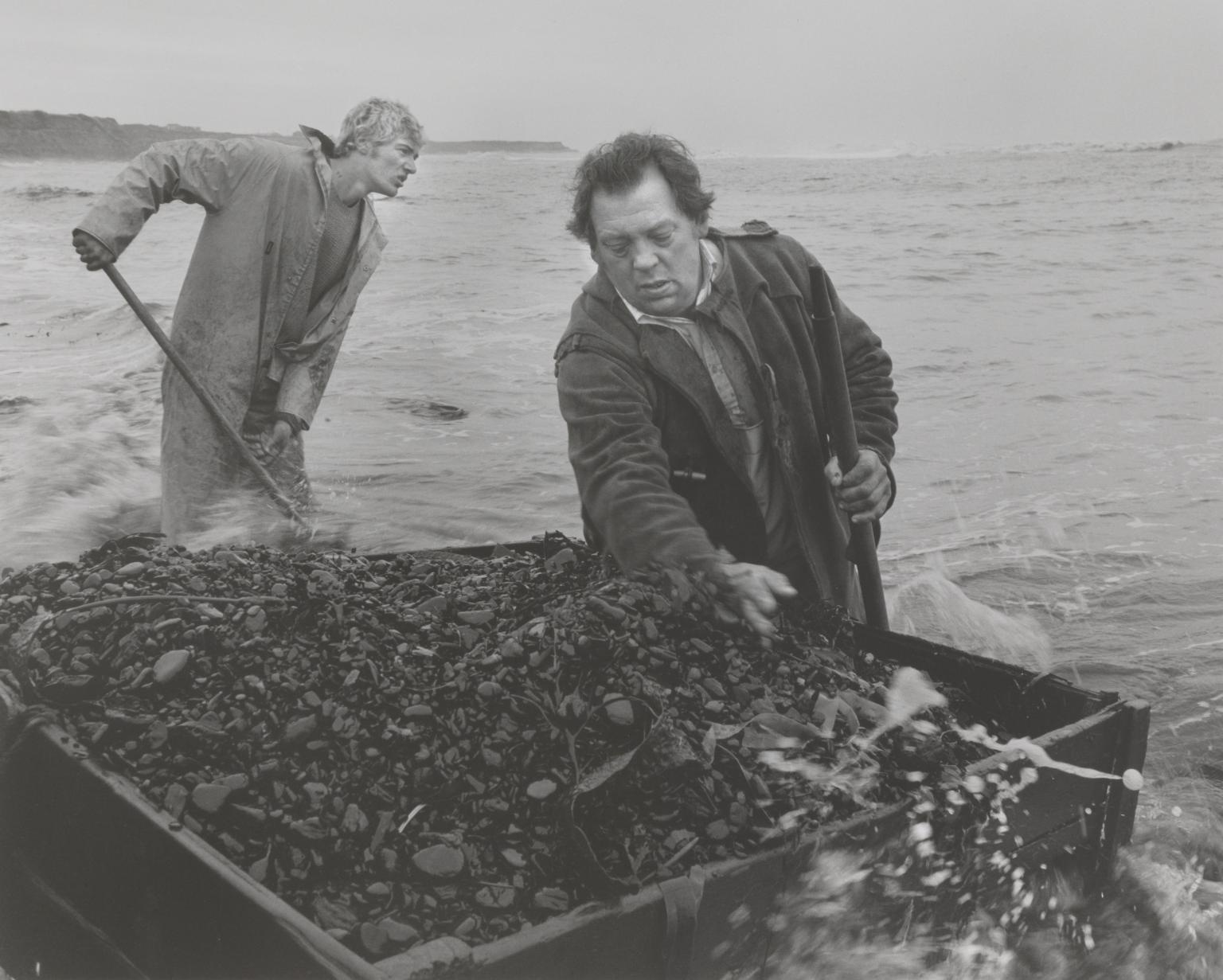 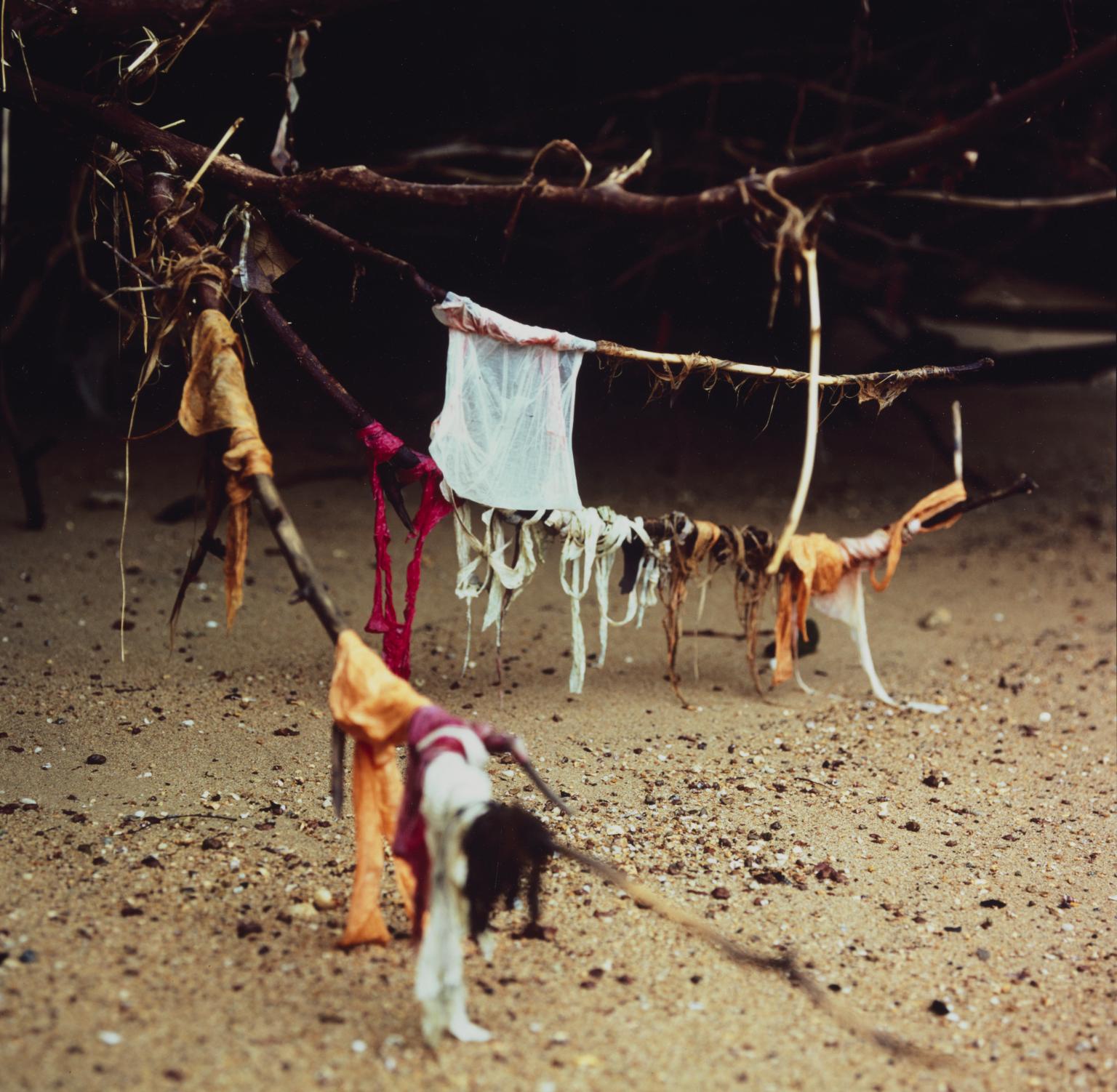 The current free-to-the-public display at Tate Modern, ‘Photography & Environment’, includes thirty individual works that highlight the human impact on Planet Earth). Chris Killip’s photo of sea-coalers, speaks to an industrialised legacy that Britain is seeking to transition away from. While Killip may may not have been motivated by climate change in his initial inspiration for the work, when it’s viewed in tandem with the Singaporean artist Simryn Gill’s Channel #10 – detailing the impact of plastic pollution on beaches – a narrative of both cause and effect of rapid industrialisation is created.

One installation at the Horniman Museum that stands as a testament to the ability of art to elicit emotion is the Beat Plastic Pollution display in 2019. 150 pieces of single-use plastic were introduced into the permanent aquarium, while 30 jellyfish were replaced entirely with plastic bags – often confused with jellyfish in the ocean. While we may have become desensitised to plastic-filled beaches, the juxtaposition between our image of pristine aquarium tanks and the delivered experience effectively reasserts the abnormality of our current situation. 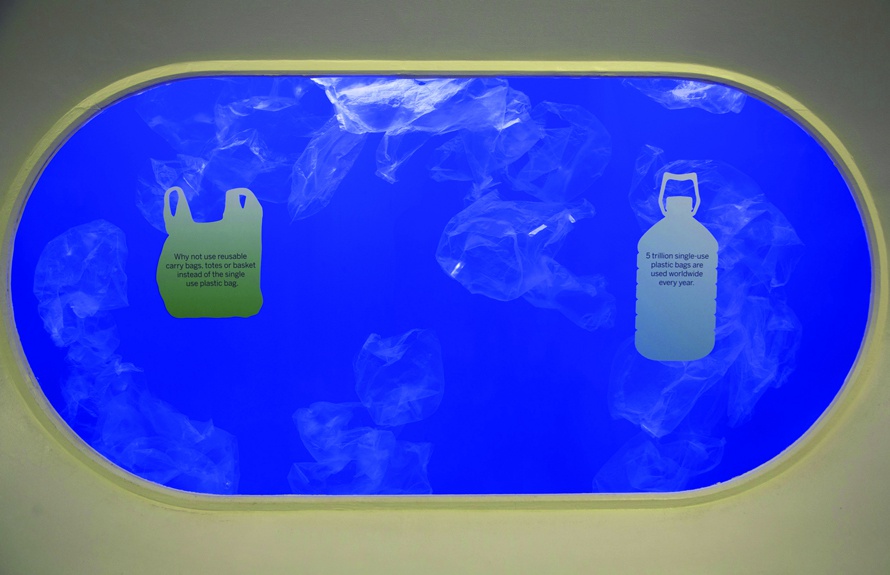 While larger museums may be able to enter the debate in multiple different ways owing to sizeable collections, smaller local museums and institutions need exploit their particular areas of focus:  Oak Project’s Silence – Alone in a World of Wounds, currently on show in the Yorkshire Sculpture Park, is one compelling example.

Heather and Ivan Morison, Silence – Alone in a World of Wounds, 2021

The artists Heather Peak and Ivan Morison have created a sculptural space made entirely of natural biodegradable materials, inside which silent contemplation is invited. The work will over time become part of the landscape upon which it is built, leaving little to no obvious trace. The project exploits the unique environment that the Yorkshire Sculpture Park provides. Aiming to encourage the audience to dwell on the extraordinary beauty of nature, is surely more impactful here than, say, a campaign to end plastic pollution of the World’s oceans would be in the same environment.

Several key principles emerge from these examples. Firstly, rather than following the route of endless expansion, there are opportunities for museums to work imaginatively with their existing collections: many have large collections, much of which is rarely exhibited. This is surely more sustainable, both in financial terms and in terms of the tangible carbon emissions than to create more temporary loan exhibitions.

Secondly, museums, if they are to be impactful, need to identify their specific entry point into climate discussions. The causes and impacts of climate change and environmental degradation vary extensively - from plastic pollution to fossil fuels, from rising water levels to debates around climate justice. No museum is able to enter all these debates; instead, they should play to their specific strengths and particular focus.

Climate change has both a multitude of causes and effects; solutions, too, must be multifaceted and diverse. Museums should continue to work within their traditional avenues, utilising their existing collections and unique spaces. Above all, museums need to work with and maximise the unique potential of their core material – the art itself - and use their individual and distinct voices, to address directly and speak effectively to the public they know, to win hearts and change minds.

If cutting emissions is considered ‘stage one’ of climate action, and increased climate programming ‘stage two’. We must ask ourselves what are stages three and four? Until this point, none of the actions discussed present any serious challenge to the fundamental structures upon which museums are built. As museums emerge from Covid, with the huge impact the pandemic has had on them, there is a huge opportunity, located in a phrase that we are rather sick of now: “build back better”. The drop in visitor numbers and impact on revenue streams has slashed future budgets across the entire sector. Museums have had to let large numbers of staff go and scale back what they are able to deliver. Will there ever be a better opportunity to firmly insert sustainability into the core mission statements on which future action is built?

There are fundamental questions for museums here that are beyond the scope of this short piece. Should museums continue to grow and expand in a world that is limited in terms of resources? Is there any way that a museum can be sustainable if it continues to rely largely upon international visitors? How do they move from changing lightbulbs to changing hearts and minds?  These questions should come as no surprise. If the climate crisis is recognised as an existential threat to humanity itself, then individual museums’ very real achievements call for more deep existential thinking and further concerted action; otherwise, they will fail to match the urgency of the climate situation that we all face.

When I was standing on the Thames last weekend, I felt genuinely excited to see how these inspiring voices and powerful messages were not just played out inside the white cube of the museum space but dominated the huge chimney of the former power station that has since become a global cultural icon. Imagine how many people across the world have received these powerful messages of anger, hope and a call to action by a single artists’ work supported by a single museum. What could the sector achieve if it worked together?