Serge Attukwei Clottey and The Line

‘We think that climate change is the future, but it is happening now’.

Art For Your World supporter, The Line was opened in 2015 as London’s first dedicated public art walk. ‘It offers a journey through a dynamic urban landscape where everyone can explore art, nature and heritage for free. ‘The Line’s outdoor exhibition programme connects communities and inspires individuals whilst promoting wellbeing and providing a year-round education programme as an outdoor classroom for cross-circular learning’.

Serge Attukwei Clottey is an artist ‘whose work explores the significance of the ocean and the impacts of global consumption’. He works across a range of media including sculpture, installation, painting, performance, and photography. ‘Serge explores personal and political narratives rooted in histories of trade and migration’.

A crucial part of his work are large yellow containers that he incorporates into his sculptural and performative practice. The containers, which are ubiquitous in his home city Accra in Ghana, have historically been used to import cooking oil in from the West and are now largely used by communities to store and transport water. He cuts the containers into small tiles which he binds together with materials like copper to create large tapestries. The notion of using the containers raises awareness of the crisis of access to water and aims to rouse local communities into action.  ‘Serge’s sculptural installations are bold assemblages that act as a means of inquiry into global consumption, climate change and the languages of form and abstraction’. 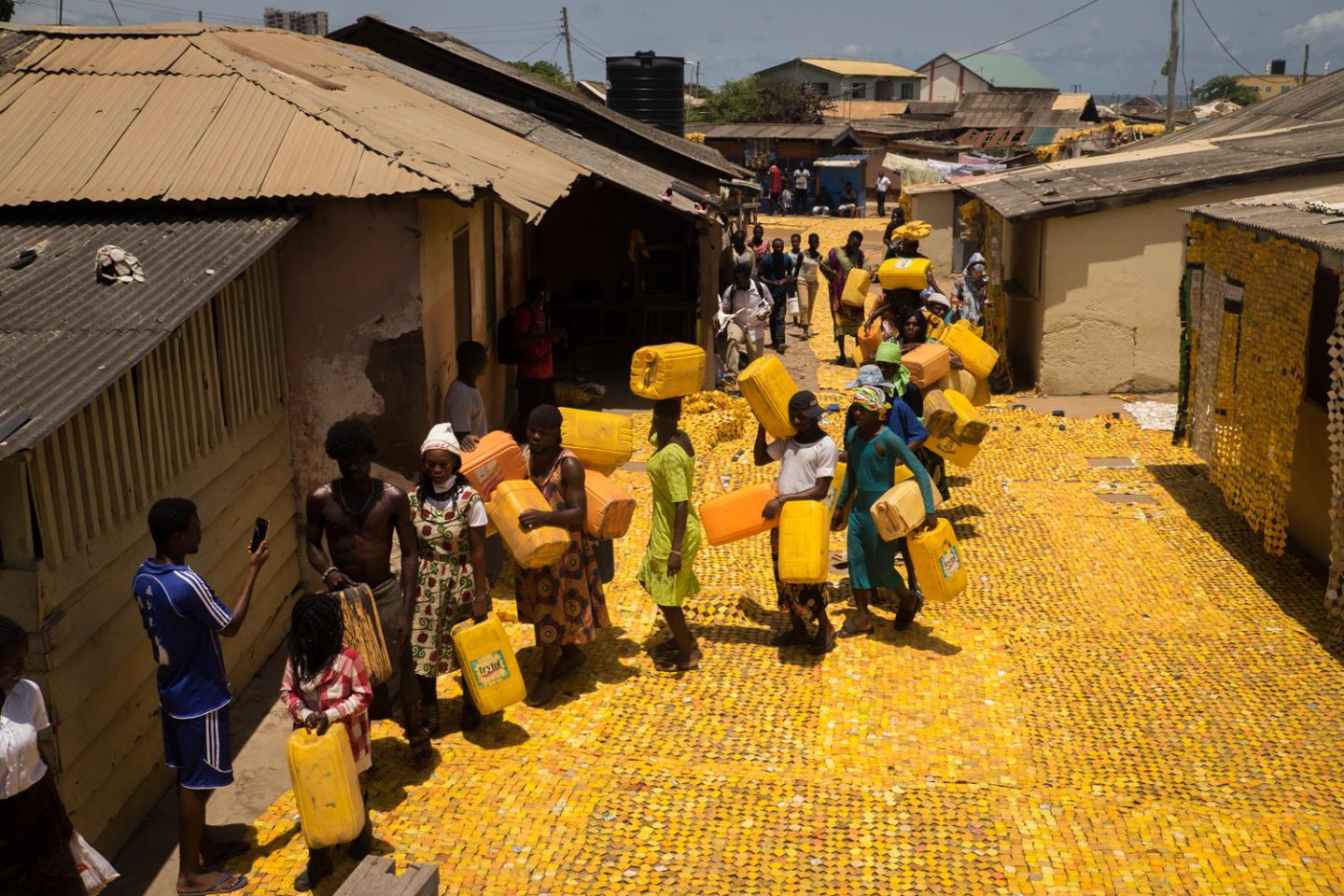 Serge is currently participating in a residency at Royal Museums Greenwich which is organised in collaboration with The Line (supporters of Art For Your World) and professional service firm Arup. Artwise met with Serge in Greenwich during his recent research trip to London. During his trip he was working with the Royal Museums Greenwich’s curatorial team, exploring the collections and archives, and spending time on The Line.

Serge revealed that he has been exploring objects in the museum that relate to the ocean, maritime history, trade routes and shipping patterns between London and Accra. He said ‘I am interested in the history and relationship of Britain and Ghana. I have looked at how the collection of objects have been archived here and how the objects are represented in the current time. I am interested in how the traces that have been left behind could be a representation of history’. This research that he is undertaking as part of his residency will be developed into a public commission on The Line in 2022.

When speaking to Artwise, Serge spoke passionately about education and why it is important to him and his practice. ‘I work with children in different schools on climate change and recycling. So, for me it is a very central part of my practice. After realising that climate change is a serious problem, I wanted to use my artwork as a reference to educate people as well as the youth’. Taking inspiration from this, a pack of resources will be developed for schools in response to the work he produces. ‘These will be supplemented by info-bursts prepared by Arup specialists on key topics including the role of oceans in our lives, recycling, plastic pollution and sustainability… these will be distributed to partner schools in London and Accra, for schools to develop creative responses to the issues and ideas raised in his work’.

Serge Attukwei Clottey has exhibited extensively internationally. As well as his residency with the Royal Museums Greenwich, he is about to reveal his site-specific installation The Bodies Left Behind at The Ritz-Carlton in Miami for Art Basel. He is also working on a commission for Kew Gardens in London. He said that although these are three separate projects, he wants ‘to tie them together’.